Neiro is a male doll created by Klara Galena's magic.

Unlike other dolls created by Klara,he has no wrist like doll and has no other appearance like a doll,he also free to do what he likes. 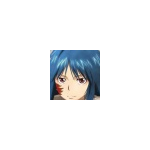