Kazuma Aozora is a tritagonist,He was the previous 5th Cavaliere and the current 4th Cavaliere.His first love is Celine.

Kazuma has purple-violet eyes and the top of his hair is white while the middle to bottom part is black,Kazuma has an above average height among the boys at the same age.He wear his school uniform at school.Kazuma is very handsome, and most of the girls who see him fall for his looks instantly (thus, resulting in many broken hearted girls).

In his real ability's form,he has pale skin,his eyes became slanted and his right eye changed into pink-red.

After Scarlet Heart's defeat,he has longer bangs and dyed his hair all white and taller body.

Kazuma was outgoing,short-tempered and kind,however this personality is to deceive Harmony&friends so that they dont suspect himself to be a Cavaliere,but according to Celline,when Kazuma is younger,his personality is like this.He can be very closed off, as well as being difficult to understand or get close to, especially since he has a habit of not expressing his true feelings..After his identity found out and as a Cavaliere,he's ruthless,rude and enjoy playing people's feelings.Kazuma is revealed to grow hatred for the previous Scarlet Hart leader and people who's blood-related with him.

Several months after Scarlet Hart's defeat,Because his uneasy feelings after Celline saved him,he is now more quiet.Despite these changes,it is evident that Kazuma is still an overall kind person.After confessed to Celline,he becomes a more happier, open person and starts to resemble his old self.

Celline greets him then she broke a window in her house using her vampire presence then jump from it to take Kazuma to her garden.Kazuma asks why she broke the window,and she simply says that by jump from the window they're faster to be inthe garden.Kazuma follows Celline walking in the garden and asked what will she do,Celline answers she wanted to find a crimson rose that is really beautiful.Celine found a big spider inside a flower that is hurted,as Kazuma shouted that its dangerous,she pitied the spider then decided to go back to her house and pet it.Kazuma concludes Celline is a really nice girl and start befriends with her since the day.

After he knows what happen to Celline's family,he cheers on her and saying that she still have her brother,butler, and he.Then he says that  he will always with Celline.Celline smiles for a second and thanked him but make a sad and want to crying face afterwards.Inside of his heart,he resolves to kill every leader of the forces that kill Celline's parents.

1 years later,he's shown in the airport and say goodbye to Celline because Kazuma moving away to other country.

Some time afterwards,he was seen talking with Cleon Neonstar about Celine,he told Cleon that Celline missed him and if she knows Cleon is a bad guy,she would go crazy.Cleon told him that he's the same with him.He also seen taking a mission that his main target is Celline,Akasha asks if he's alright which Kazuma replied that he dont care and Celline is nobody to him,which Akasha concludes that he was lying.

Kazuma likes Celline from the time they played together,Kazuma also one of the few person that knew Celline's real past,before she remembers it again.

After meet Celline again at the school in order to spying her and Harmony,He continually helps and watches over her,and even becomes possessive of her,as Kazuma truly cares about and really loves Celline even he knows that it wouldn't last long.However,after he revealed that he's a Cavaliere and he apologizes to Celline,they're relationships become complicated.Later revealed that he joined Scarlet Hart and manipulates people's emotions and feelings just for one goal,that is to kill the previous Scarlet Hart leader,however his hatred grown and he wanted to kill anyone that blood-related with the previous and every Scarlet Hart leader,to avenge Celline's parents and he think Celline would stop cry.

Celline also likes him although she forgotted it for some time,she even sacrificed her health,vampire live and magic abilities to save Kazuma's life even there are the consequences.

His magic is named Moon Assasin-magic,a magic that can use the air power and moon's power.His magic can seal any forbidden magic or unseal it.He can also steal lost/dark magic from it's original user and the user cant activates it again,but this only can be do when he already touch the original user's body.He also can control anything that using air or speeding himself. 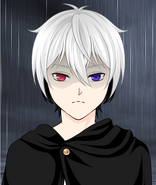 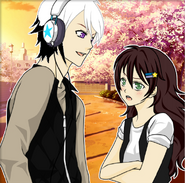 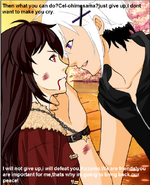 celline vs kazuma
Community content is available under CC-BY-SA unless otherwise noted.
Advertisement